Welcome to AR10T.com, the world's first forum dedicated to AR-10™ rifles .  We invite you to JOIN our friendly firearms enthusiast forum.
Recent Articles
› ‹

August is fast coming to a close, thus ushering in September and the opening of bow season for deer in many states. However, most avid deer hunters will agree that bow hunting for deer is a relatively close range proposition. So, how do you get that big buck close enough to your stand to make that perfect shot? Well, my answer to that question is to use deer scents.

In fact, if you visit any sporting goods store just prior to the opening day of deer season you will see a large selection of various types and brands of deer scents on their shelves. However, the selection in some stores can be so overwhelming that you find yourself unable to make a choice due to information overload. Therefore, in order to prevent this state of debilitating indecision, it is helpful to know what type of scent you are after before you ever enter the store. But, in order to do that, you need to be aware that deer scents are divided into four separate and distinct types: deer lures, mock scrape lures, food attractant scents, and cover scents.

Therefore, first we should examine deer lure scents because they are by far the most popular type of deer scent. However, be aware that this category of deer scent has two sub-categories which consist of both urine scents and glandular scents. Urine scents most often consist of either doe urine such as Tink’s Doe-P or Code Blue Whitetail Doe Urine or doe-in-estrus urine such as Tink’s #69 Doe-in-Rut or Code Blue Doe Estrus Urine or dominate buck urine such as Tink’s Trophy Buck Lure or Code Blue Whitetail Buck Urine and they are generally applied to either the soles of your hunting boots or to a rag which you drag behind you as you walk into your stand. This creates a scent trail that often causes any deer that crosses said trail to turn from their intended course in order to follow the scent trail you have laid down and thus, lead them right to your stand or blind.

Next, we have a second category of deer lures made from glandular secretions such as Code Blue Rack Rub and Code Blue Whitetail Tarsal Gland. This type of scent most often consists of either Tarsal, Preorbital, or Interdigital glandular secretions and each one is designed to meet a specific purpose. For instance, by combining tarsal gland scents (taken from the glands located on the hind legs of mature, rutting, bucks) with dominate buck urine, we can create a powerful combination of scents which we can then use to either "doctor" a pre-existing scrape for to create an entirely new scrape. Plus, by rubbing Preorbital scents (taken from glands located on the deer's forehead) on the limbs above our "doctored" scrape or scrapes that we have created, we can cause any buck that comes to investigate our scrape to linger long enough for us to get a clean shot. Last, Interdigital scents (which are harvested from the glands between the deer's hooves) are also very useful for creating scent trails which will lead deer to our tree stands or ground blinds. Some other useful products that are also designed for this particular purpose are mock scrape scents such as Tink’s Power Scrape and Code Blue Scrape Mate which are designed for the same purpose as the above mentioned scents.

A fourth type of deer lure scent is that of food attractants. Food attractants consist of such products as Tink’s Sweet Weed and Salad Dressing scent and Code Blue’s Apple Swig and Corn Craze. However, like cover scents, it is important to use an attractant scent that is appropriate to the area that you are hunting. Another popular type of food attractant is the type which is poured onto the ground to create a mineral lick such as Deer Cocaine. All animals need certain minerals in order to survive (such as salt) and thus, mineral licks are extremely popular amongst many types of animals once they are discovered.

Also, it is important to be aware that different types of scents are used indifferent manners. For instance, urine scents are most often sold in liquid or gel form which is then applied sparingly to the soles of your hunting boots or to a rag which you then drag behind you while on the way to your stand in order to create a false tail for the deer to follow. On the other hand, the various types of cover scents are available in both liquid form (which is meant to be dispensed on a rag and then hung near your stand) and in solid form as impregnated plastic wafers which you then attach either to your clothing or to a tree branch adjacent to your tree stand. In addition, when choosing cover scents, it is very important to choose a scent that is appropriate to the area in which you are hunting. For instance, apple, persimmon, and acorn scents often work well in eastern deciduous hardwood forest but are not appropriate for use in western or northern evergreen forests. In addition, sweet corn scents often work well when hunting on the edge of agricultural fields but they are not appropriate for hunting in either deciduous or evergreen forests.

So, now that you know a little bit about deer scents and what type of scent to use in what type of situation, you can now make an educated decision about what type of scent would best suit your particular purposes and thus, avoid the sensory overload that comes from having too many choices without enough information to sort them all out.

As big game hunters and centerfire rifle shooters we like to overshoot our targets -- delivering more than enough energy to cleanly kill our target. However for small game hunting like squirrels, rodents, skunks or other pesky critters modern air rifles are more than capable of getting the job done without the cost expensive ammo or the loud report of a rifle or shotgun.

As a small game hunter you will probably still want the best. One of the best widely available pellet rifle manufacturers today is Gamo. Their newest air rifles use inert gas allowing a more lightweight air rifle. This removes the spring mechanism, minimizing recoil and further reducing its weight. All these qualities make this one of the best rifles for everyone. 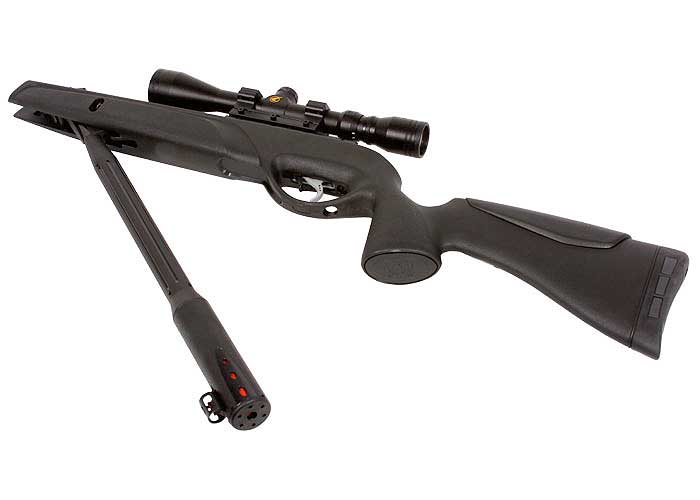 The distance of air rifles is grouped into four categories, light, medium, magnum and super-magnum. Light air rifles are intended mainly for use up to 35 yards, which make them great all-around general use for target shooting, pest control and animal hunting. Medium extends it to 50 yards and the two magnum classes extend it up to 80 yards for precision targeting. Picking off a squirrel from 80 yards in a tree at night is a notable achievement for any marksman.

The following Gamo air rifles fit the bill for the even the most discerning small animal hunter:

With 5 in the series, the options are plentiful. Used as a great small game hunting rifle and great with pest control this series has some top notch options for making sure your hunting goes as planned.

Gamo raised the bar with this series. With the new raised rail scope it goes beyond what most air rifles can offer in scope technology. As well, when the scope is attached it cannot slip backward or forward on the rail, a large issue with other rail scopes. This series has been often remarked as the best series Gamo has ever made.

This is one of their best series for small game hunting, not so much for the rifle as for the accessories that come with it. These include mountable onto the scope flashlight and laser pointer for better accuracy during nighttime’s hunting.

Based on the TV series these weapons are very popular for reasons other than their TV fame. They use revolutionary new inert gas technologies that quiet the shooting by more than 50%, lowers its weight and recoil during shooting.

As small game and varmint hunters go, you still want a reliable air rifle. With any of the choices above your small game hunting will go smoothly, time and again.

Add your rifle to the AR-10 Photo Thread!

About AR10T.com
AR-10(T) is a community focused on rifles, optics, scopes, gear, accessories, and components used by the professional operator and skilled marksman. Enthusiasts, shooters, and gunsmiths alike contribute to our gallery, articles, and reviews Thank you for visiting!